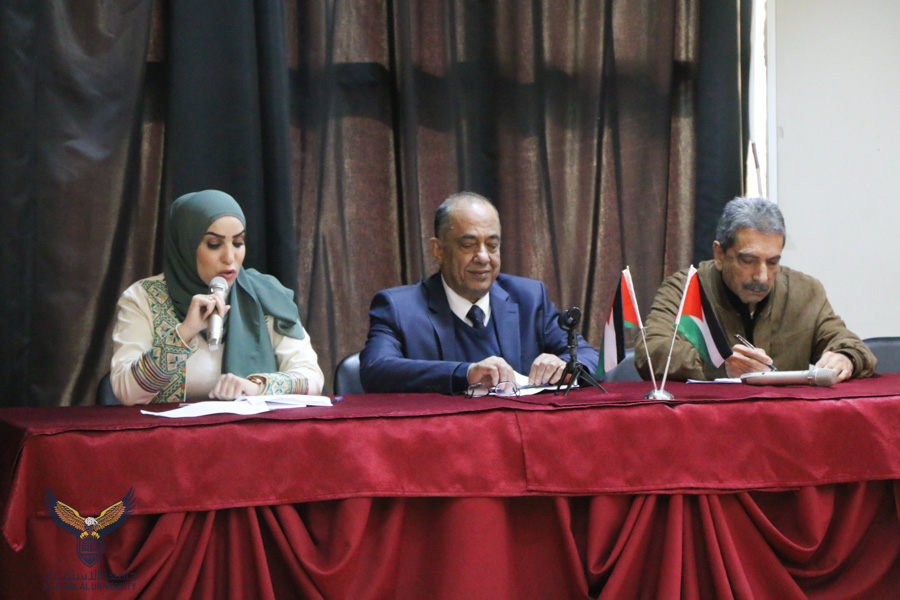 Al-Istiqlal University held a political conference entitled "The Political and Legal Implications of the Deal of Century ", for the employees and students, in the presence of HE Maj. Gen. Dr. Tawfiq Al-Tiraw, the member of the Central Committee of Fatah Movement and Chairman of the Board of Trustees of Al-Istiqlal University, Dr. Mohammed Shalalda, the Palestinian Minister of Justice, Mr. Jehad Abu Al- Asal, the Governor of Jericho and Al Aghwar Governorate, the Deputies for Academic, Military, Administrative and Financial Affairs, and representatives of the governmental institutions and the local community, at Sheikh Hazza Bin Zayed Al Nahyan Theater, on Tuesday 4th of February 2020.

Maj. Gen. Al-Tirawi welcomed the attendees, praising the role of Dr. Shalalda for his work at Al-Istiqlal University, and his voluntary work in several aspects, providing an overview of the plans which included building a military hospital in Jericho and establishing a Forensic laboratory at Al-Istiqlal University, mentioning the provision of the educational scholarships for the students in the fields of military and forensic medicine which will support to build a competent staff to work in the military hospital, stressing the need to have cooperation with the Palestinian Ministry of Justice and the Institute of the Forensic Medicine for developing the staff in several aspects.

Furthermore, he pointed out the role of the Palestinian leadership in facing the Deal of Century and the role of the United Nations in rejecting the implementation of the Israeli decisions which concern ( the land, the Palestinian prisoners, the refugees, and the water), stressing that it is not sufficient to say "NO" for the Deal of the Century, but rather it should be followed by determining the foundations of resistance to this deal, mentioning the positions of the Arab states and the danger of the security coordination over the Palestinian cause. Also, he corroborated the importance of Palestinian National Unity, saying: “Be opponents for the leadership, but with respect and commitment”, explaining the importance of culture and reading in facing the Deal of Century.