HE Maj. Gen. Dr. Tawfiq Al-Tirawi receives the Ambassador of the State of Palestine to Ukraine Hashem Dajani 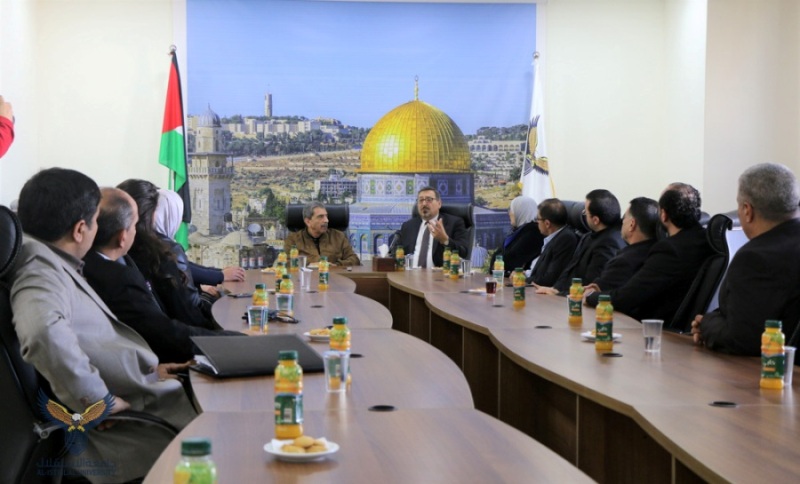 HE Maj. Gen. Dr. Tawfiq Al- Tirawi, the Chairman of the Board of Trustees of Al-Istiqlal University, received Mr. Hashem Dajani, the Ambassador of the State of Palestine to the State of Ukraine, in the presence of Dr. Rajaa Sweidan, the Deputy for Administrative and Financial Affairs, and the faculty members, inside the campus, on Wednesday 5th of February 2020.

Maj. Gen. Al-Tirawi welcomed Mr. Hashem Dajani, praising his diplomatic and patriotic efforts, and his efficiency in representing Palestine and the Palestinian people, stressing the readiness of Al-Istiqlal University to cooperate with any delegation, college, university or any international institution for organizing the different activities, providing an overview about the plans of Al-Istiqlal University that he seeks to achieve.

Furthermore, Mr. Al-Dajani expressed his gratitude for visiting Al-Istiqlal University, praising the efforts of Maj. Gen. Tawfiq Al-Tirawi, in building and realizing the great dream which is represented by Al-Istiqlal University, stressing the uniqueness of the University and its academic and security cadres. Also, he mentioned the high level of education and skills which are provided to the students in the field of security sciences, despite the presence of occupation and blockade over the different aspects of life, stressing his readiness to discuss ways of cooperation that would strengthen and develop Al-Istiqlal University in the various fields, indicating the importance of the presence of women and their effective role in the development of institutions, praising the efforts and distinction of Al- Istiqlal Folklore group in delivering the Palestinian cause through their traditional shows in the world.

For her part, Dr. Sweidan praised the role and efforts of the Palestinian Ambassadors in the different countries of the world, providing an introductory overview of Al-Istiqlal University and its system, stressing the keenness of Maj. Gen Al-Tirawi to give each building at the University a name of a martyr or a Palestinian public figure, clarifying the plans of the University that will be implemented in the coming period, besides the new specializations of the Master Program at the University.

During the visit, an introductory film was presented about the system of Al-Istiqlal University. In addition to a tour was organized for the Ambassador to see the various colleges and the facilities of the University, while the deans of the colleges clarified the different majors and programs with explaining the importance of each major in the future life of the students.